Leaders Set a Culture and See the Future 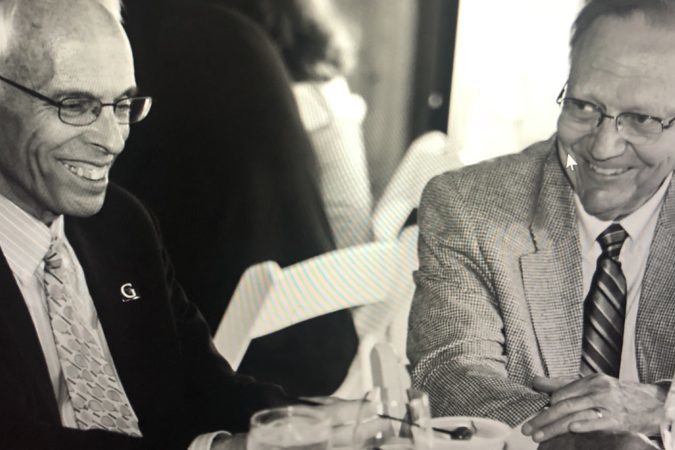 Through Story 19 Consulting I am already having the great honor of working with incredible leaders. In true thieving fashion as much as I teach them I steal pieces of their brilliance with every meeting. This new venture has sent me on my own nostalgic journey chronicling the incredible leaders that have impacted my life.

As a lifelong tennis player the first leaders to impact me were my coaches. Jim Holden, pictured right above, was my high school tennis coach for five years at Northfield Senior High School in Minnesota. He was an incredible tennis coach, but lost on me at the time was his ability to set a culture of expectation. I was generally well behaved in high school, and yes memory paints a prettier picture than reality, but there were occasions when my temper got the best of me causing me to throw my racquet for distance. The instant the racquet left my hand I knew the exact look I was going to get from “Coach”. That kind of behavior was NOT acceptable under any circumstances on his team. He would give me “the look” and give me a code violation sending a clear message. There was not a player on any of his teams who did not understand the expectation for behavior on his team. While that created a surprise free environment which allowed us to thrive more important he taught us to have that expectation of ourselves. I cannot say I have always lived to the standard set by Coach Holden’s culture, but I have always strived to be the person his team culture taught me to be. As a leader his culture is a legacy to each of his players.

Steve Wilkinson, pictured left above, was my college tennis coach at Gustavus Adolphus College. “Wilk” was an incredible coach creating a Division III dynasty with incredible athletes that made marked improvements as tennis players. He also was the founder of Tennis and Life Camps, arguably one of the best overnight tennis camps in the world. He taught me to be a tennis player, he taught me to teach, and he taught me that tennis was our vehicle to finding our best selves in life. However, his lessons didn’t sink in until after my time at Gustavus was done. If Coach Holden set the culture model in behavior I destroyed it in my college days. To say I was not my best self is to minimize the dark place I was in. Wilk could have, possibly should have, kicked me off the team and fired me from Tennis and Life Camps, but he didn’t. Instead he chose to see what I could be and what I would be in years to come. After I left college he was the first to be a reference for me on every job application. He mentored me through my early years with the US Wheelchair Tennis Team. He helped me find my best self when even I couldn’t see it. He gave the gift of our future selves to every player on his team, every staff member at TLC, and every person he came across.

The picture above is from my wedding in 2013 where two of the greatest leaders and mentors in my life came together. It would be the last time I saw Wilk after his incredible battle with cancer which he braved with grace and dignity. I keep in touch with Coach Holden albeit not often enough. As leaders they set a culture, saw my future, and were critical in developing the man I would become. And, as seen above, they never left my life.

Leadership and Culture in the Tennis Industry
August 31, 2019